First and foremost I would like to thank everyone for supporting my blog, my page, and my non-profit organization. On August 25, 2017 the launch of Harmonious Grace, Inc. happened and it is already on it’s first mission! Helping those in need due to the tremendous damage that Hurricane Harvey has brought to Texas. 37 deaths have been reported so far and the toll is still on the rise. One of them even being a police officer on duty, SGT Steve Perez, who drowned while trying to make it in to work. Although the heavy rain has ceased in Houston, there is major and catastrophic flooding everywhere in facilities such as evacuee shelters, nursing homes, and community centers. Many volunteers have utilized their private boats in order to help rescue as many numbers of people as they can. There has been an admirable number of individuals to come out and support and assist the victims of Hurricane Harvey. Unfortunately, there is still more damage to come and those in the path of Hurricane Harvey’s damaging winds are bracing themselves.

“Harvey is still threatening to dump an additional 3 to 6 inches of rain from northern Louisiana into western Kentucky, forecasters said. It weakened over land and fizzled to a tropical depression Wednesday night, with winds of 35 mph.”
Holly Yan, Nicole Chavez and Ray Sanchez, CNN http://www.cnn.com/2017/08/30/us/harvey-texas-louisiana/index.html 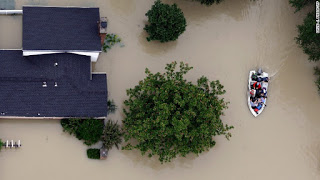 Right now, at least one-third of Houston is covered in water. Flooding will continue in Houston through the weekend and will also reach parts of south western Louisiana. Harvey has even surpassed a US record for having the most rainfall from a single storm, hitting Texas with 26 inches of rain in just 24 hours. The record is now at 52 inches of rain. By the time it is over, Harvey will have dumped 1 million gallons of water for every man, woman, and child in Texas.

Devastating images of people found trapped or clinging to trees have flooded the news and national headlines everywhere. Donald Trump has not gone to any of the locations that have flooded or physically gone to support the victims or their families…but he offered his condolences to the families and those who have loved ones who were lost during the storm.
“To those Americans who have lost loved ones, all of America is grieving with you and our hearts are joined with yours forever,” President Donald Trump said in Springfield, Missouri
Holly Yan, Nicole Chavez and Ray Sanchez, CNN http://www.cnn.com/2017/08/30/us/harvey-texas-louisiana/index.html
The path of Harvey is heading towards the east and is expected to make more landfall this weekend in Louisiana, but will die down and grow weaker by the time it makes it further east in Tennessee, Kentucky, North Carolina, Northern Alabama, Virginia, Southern Ohio, and West Virginia. 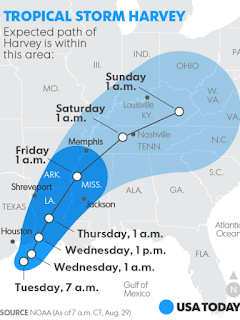 Harmonious Grace, Inc. is full speed ahead with helping out the families in need as much as we can! A fundraiser has been launched in their honor to give to the American Red Cross. Donations that will help contribute more food, shelter, and clothing needed for those affected. Harmonious Grace, Inc. was started in order to make a difference in the community and around the entire nation. We are fully committed to raising up to $75,000 for supplies and programs to start Harmonious Grace, Inc. and 20% of those proceeds will go to the American Red Cross. It does not just stop at money and funds, even you can contribute clothing, shoes, and food. These people need EVERYTHING that is available to them at this moment. So please follow the link and give anything that you can. No donation is ever too small! Also stay updated on Hurricane Harvey’s status and strength and on the new storm named Irma, forming in the Pacific Ocean. It is expected to be a full hurricane by this week’s end!
If you would like to make a contribution to this cause please just visit the link below to make a donation! Also be sure to add Harmonious Grace, Inc. on Facebook, Twitter, and Instagram to stay updated on events, fundraisers, and community outreach! The website will be up and running no later than this weekend!!
We cannot change the world by talking about it and standing still, action has to be taken!
“Changing our momentum one crown at a time!”
https://www.gofundme.com/harmonious-grace-inc
Harmonious Grace, Inc.
Twitter: @HGIncorporated
Instagram: @harmoniousgraceinc
Facebook: www.facebook.com/harmoniousgraceinc
Website: www.harmoniousgraceinc.org